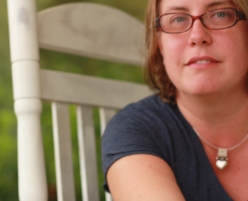 Theresa Vinson Stenersen is a knitting designer and longtime columnist for the online magazine Knitty (“Techniques with Theresa”). She is well known for the illuminating lucidity of her instruction on methods and techniques often thought to be “advanced” and “challenging.” Theresa learned to knit first from her aunts with whom she grew up in the Southern Appalachians and later while living in Norway for many years. She also learned much about creating fiber dyes from natural sources such as mushrooms. Theresa now lives in Western North Carolina on a farm with her family, including several humans, alpacas, sheep, chickens, cats, and a marvelous dog named Audrey.